skip to main | skip to sidebar

Refried Black Beans For All!

Due to surgery, I've been unable to cook for awhile with awhile longer to go before I get back to the stove. Luckily, I tried to fit a lot of cooking under my belt before going under the knife, so I can keep this blog going.

I was deliberating which Fall delight to share first when I learned my dad had bought an enameled Dutch oven of his own - and we all know my love for my Le Creuset! His first dish was Creole Fried Chicken from the Cook's Country cookbook I gifted him. Sigh, I've been wanting to tackle their various fried chicken recipes. I was thinking of more great recipes from the America's Test Kitchen family for him to try and remembered the highly successful Mexican Rice I made for our tamales party. And why make the rice if you don't make the amazing refried beans, too? So I thought I'd share the vegan version I created through altering the America's Test Kitchen recipe. 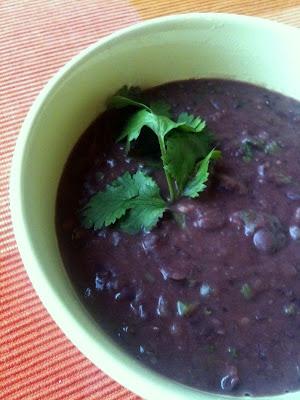 My only complaint about ATK's refried beans was the onion. The onion flavor was perfect, but when I included a whole medium onion as instructed, it meant there was nearly as much onion crunch as smooth bean. It caused a texture issue. I've been experimenting with using French Onion soup broth as a vegetarian alternative to chicken and beef broth, since I usually find vegetable broths disappointing. I'll post other times I've successfully used this option in the weeks to come. I suspected this might be the answer to both veganizing this recipe and retaining the onion flavor. With the onion reduced from 3/4 cup to 1/4 cup and the chicken broth replaced with French Onion soup, it was simple to replace the 1 Tblsp. rendered fat from 3oz. of salt pork/bacon with cooking oil and doubled the salt to replace that lost when tossing out the salty grease. And, voila! Vegan refried beans! I also chose to use black beans, but you could very easily stick to the pinto beans used in the original version. These were so darn tasty it was hard to put down the fork, and the leftovers were perhaps even better after the flavors melded. Definitely a new favorite, and so very easy and healthy! 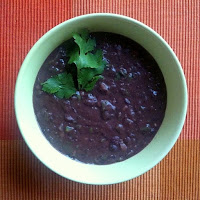 In a food processor, process all but 1 cup of the beans with soup until smooth, about 15 seconds. Add the rest of the beans and pulse until slightly chunky, about 10 pulses.

Heat oil in a 12 inch nonstick skillet to medium-high. Add onion, jalapeño, and cumin and sauté 3-5 minutes until soft and starting to brown. 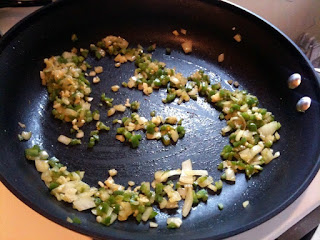 Stir in Garlic and cook until fragrant, about 30 seconds. Reduce heat to medium and stir in the pureed beans. They will be runny. 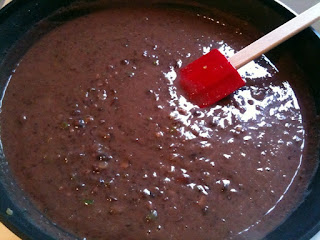 Cook at medium heat until thick and creamy, about 4-8 minutes. Remove from heat and stir in cilantro and lime juice before serving.

If you want the original recipe, reverse engineer my changes to sub back in the original ingredients. Or purchase The Complete America's Test Kitchen TV Show Cookbook 2001-2010 (excellent purchase no home cook would regret) or a membership at CooksIllustrated.com (or just sign up for a 14-day free trial membership). And again, no, they don't pay me. I'm just a big ol' fan girl they've never heard of.
Posted by Unknown at 2:03 PM 1 comment: