skip to main | skip to sidebar

Well, it turns out the inability to cook saps my desire to write about cooking. But I'm pretty much back on my feet enough to prepare simple dishes and make short trips to the nearest market, so my interest is once again piqued. So it's about time I shared those Autumn dishes I promised so long ago! Just in time for winter. Oops.

I just reread my last post, Vegan Refried Black Beans, and thought I'd get back into the swing by showing my successful experiments using French Onion soup in place of vegetable broth in cooking grains.

Vegetable broths are often tinny with off flavors, and lack that umami flavor I love so much in chicken and beef broths. In my search for a satisfactory alternative, I first made some weird attempts with mushroom broth, since mushrooms are packed with umami. But everything just came out tasting like musty mushrooms. But then I saw onions in a list of foods that contain the molecule or whatever that has that delicious meaty umaminess and had an epiphany that has delivered many successful vegetarian dishes. French onion soup, available in most grocers' soup and broth aisles, makes a great vegetarian substitute for beef and chicken broth. It has become the standard vegan base for my favorite grain, Kashi 7 Whole Grain and Sesame Pilaf, as in these three recipes. Feel free to substitute your favorite whole grain or whole grain blend.

The simple starting point from which my pilaf dishes grew, this is a super easy and delicious way to add whole grains to any meal.

Cook according to package directions using the above ingredients in place of water. 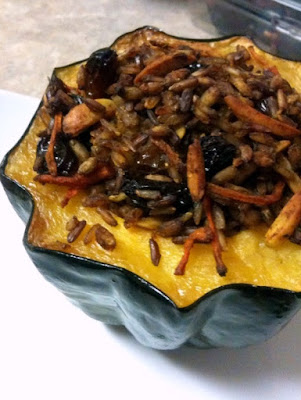 I found this recipe in the comment section of Kashi's website. Yes, I'm that big a fan of Kashi Pilaf, as well as a number of their other products, that I have been on their site and even read the comments of other fans. 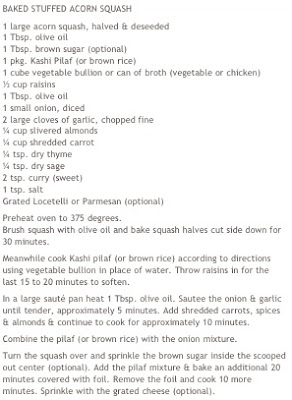 Of course, the day I finally made this, I did my shopping at a market that sacrilegiously did not carry Kashi Pilaf, so I used a blend of red & brown rice with rye and barley instead. I cooked one cup of the rice blend according to package directions, substituting onion soup for water. I omitted the diced onion since I figured the broth would add plenty of oniony flavor. Also, always remember to add garlic only for the last 30-60 seconds of sauteeing, just enough time to become fragrant. It really should never be sauteed as long as other vegetables. I added pressed garlic cloves at the end of the cooking time with the carrot, almonds, and spices/salt. I skipped sprinkling with grated cheese before serving because the thought of curry and cheese together weirded me out. Instead, I served the squash with raw brown sugar on the side for copious sprinkling by the spoonful. The extra sweetness was perfect to balance out the super strong spices and saltiness. This was just the final touch this fragrant autumn dish needed to reach true culinary heights. 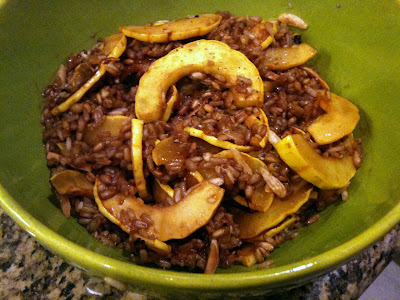 I developed this dish as a faster, simpler alternate to the stuffed squash I love so much. Delicata makes  a great substitute for the cook in a hurry. Since the skin is edible, you can bake thin slices much faster than preparing other varieties, and you can then toss everything together and skip the second baking post-stuffing. The removal of spices, omitted to recover the extra time it takes to bloom the spices on the stove, also makes this version more versatile and easier to pair as a side dish with a larger variety of entrees.

Cook pilaf according to package directions using onion broth, garlic powder, and 1 tablespoon soy sauce instead of water. Add raisins or other dried fruit during final 15 minutes of cooking. In the version pictured above I used freeze dried Just Apricots to add tang and sweetness.

Meanwhile, toss squash slices with oil, black pepper, and 1 tablespoon soy sauce. Spread in a single layer in a shallow baking pan. Roast in upper third of a 475º oven 15 minutes, or until squash is just tender. I even use the toaster oven to avoid preheating time. 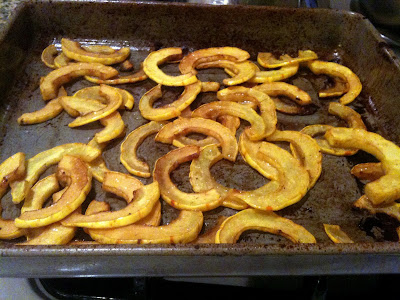